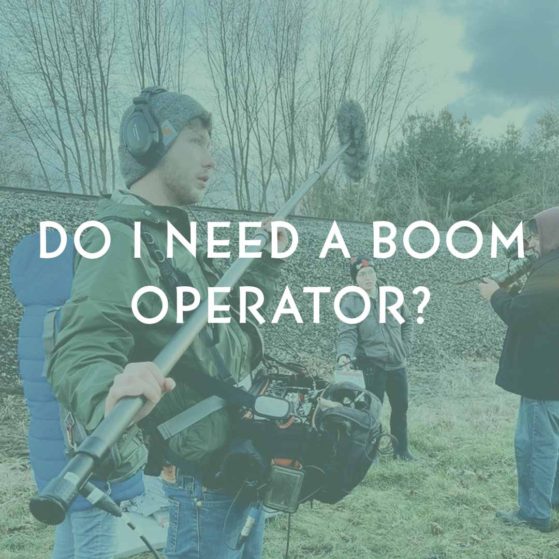 Do I need a Boom Operator?

This is a question we get all the time from our location audio clients. If you need sound recorded during your production, hiring a Sound Mixer should be an easy decision. But what about a Boom Operator? Should you hire a Boom Op along with your Sound Mixer?

To answer this question, we checked in with one of our Production Sound Mixers, Joe Vnuck.

In my opinion, every production should consider hiring a Boom Operator in addition to a Sound Mixer. This is because they are two different jobs that happen simultaneously. Much like how a Camera Operator needs an Assistant Camera to pull focus for them, a Boom Op needs the Sound Mixer to make sure levels across the active mics are balanced. The Mixer symbiotically needs the Boom Op to position the boom mic so that they can focus solely on mixing. Without a Boom Op, the Mixer would need to hold the boom and also mix, which creates the possibility that one or both of these duties will suffer as a result. Other advantages to having a two person audio team include speeding up the process of prepping and mic’ing talent.

As a Boom Op, you need to be able to see the action of the actors and move your microphone accordingly, but this means you can’t keep an eye on the levels on your mixer. Holding the boom pole takes two hands, which means in order to make a level adjustment on your mixer, you are going to have to one hand the pole. It isn’t impossible, but it certainly isn’t ideal. Similarly, as a Sound Mixer, you need to watch and listen to your levels and mix channels louder or quieter. This, more often than not, takes two hands with each riding a different fader simultaneously. With enough actors, you may have a finger on four or more faders. Both Mixing and Boom Oping can get tricky and to do these jobs right requires all of your focus and certainly two hands.

There are some situations where you may not need a Boom Op. For example, in certain handheld or Steadicam shots where having fewer people and cables around is desired. If the camera is moving a lot, the Boom Op will be too. If the Boom Op is tethered to the mixer via an XLR cable, it might just be easier and safer for the Sound Mixer to wear the mix bag and also hold the boom pole. The last thing you want is the Camera Operator as well as the camera itself tumbling because of a loose XLR cable. An alternative solution to this is if the Mixer and Boom Op work wirelessly, then none of this is an issue and the two can work separately.

If you are working with a solo Sound Mixer who is also Boom Operating, one way to ensure you’re getting the best quality sound is to run enough rehearsals for 1. the Camera Operator and Mixer/Boom Op to know how they will move together and avoid shadows and 2. for the Mixer to set their levels based on the rehearsals in order to avoid having to adjust gain during a take. If the Mixer can get their levels set based on the rehearsals then during the takes they can focus on booming. Even with rehearsals, it is important to remember that actors can change their performances from take to take, so giving the Mixer notice of things like screaming or whispering that weren’t in the last take will help them set their levels for the next take.

Finally, if you’re unsure whether your production will require a Boom Op consider these things: How many actors will I be having to boom and also mix in any given scene? If it is more than two, ask for a Boom Op. Do the shots involve a lot of camera movement, specifically Handheld or Steadicam? If the film is entirely shot on the move a Boom Op will likely not be helpful, especially if the Sound Mixer will have to be tethered to them.

The more complicated the shots are in general, the more likely you will need a Boom Op. If you have the scenario of a very complicated handheld shot or a “oner” (as in no other coverage) then consider having not only a Boom Op, but a means of working wirelessly with your Boom Op and express this need to production well in advance. The takeaway here is in almost all scenarios it is better to have a Boom Op than to not and the results of having a two person audio team will likely be better sounding audio and less work in post!